The Passion Behind the Guides
By Cam Zirk 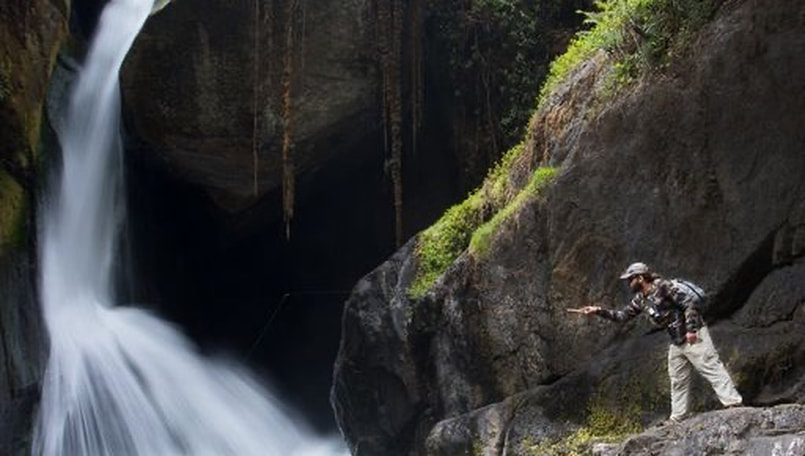 This past year was my 3rd program being part of Fish for Change and my first time being a student leader. I had met all the guides in Costa Rica; Tom Enderlin, Kevin Jackson, Napo, and Kaylor (known as Rasta). I want to dedicate this to the people who make it possible to run programs in Costa Rica, all the guides and of course, Heather Harkavy.
​
Leading up to being a student leader in Costa Rica, I was unbelievably happy and excited. Meeting the students over zoom, emailing parents, talking to the kids after the zoom, answering any questions they had, and making lesson plans and journal questions for each night didn’t even feel like work. It’s an amazing feeling when you’re taking what you love to the next step and sharing that love with others. It’s a feeling that is hard to describe but during my trip it just felt like everyone was there to share experiences, perspectives, and love. Something that touched my heart while being a student leader for the first time was when I first met my students, all they were talking about what fish they were going to catch. But at the end of the trip all four of Fish for Changes values were being brought up into conversation without being facilitated. This moment felt like I had positively touched their lives in a more meaningful way. I will always look back at this experience being one of the first successful trips that I felt like I actually made an impact on the way Gage, Kyle, Hudson, and Coco acted and thought.
​
Tom Enderlin is not only a guide, leader, father and husband, but someone I look up to. Tom shines a special light in everyones life, he’s a humanitarian. Tom’s able to to give happiness and joy to anyone who comes across his path. The first year I was with Tom he intimidated me a little bit, along with the students. He does this funny thing where he only lets students ask up to 5 questions a day but in reality we asked him a lot more questions than that per day. He brings laughter to the table and the smaller connections that become larger as the program continues. Tom really hits the conservation value of Fish for Change. He not only runs a lodge in Costa Rica called, “The Tarpon Jungle Reserve” but is also part of many other non-profits. Tom works with Bonefish Tarpon Trust working on a genome mapping project to see how the Costa Rica Tarpon fit on with the global population. One of the last projects Tom is also working on is on the jaguar population dynamics study and the corridors Jungle Tarpon Reserve. Part of how Fish for Change facilitates towards conservation is Tom, Kevin, and students go into the jungle, and put in new sim cards or re-position the cameras. In the first week some of the students were luck enough to see a jaguar swimming in the water then disappearing into the jungle. Tom is a person who not only cares about the fishery but also the life around the jungle. Every animal has a major role in the eco-system and it every one of them should be protected. Not to mention Tom can mimic almost every animal to a T.
Kevin Jackson. There’s a lot that can be said about Kevin. If I were to sum it up, I would say Kevin is a jolly, knowledgeable science nerd who is one the best people to have with you on crazy adventures and jungle experiences for his insights and positive nature. Kevin is an excellent teacher. One of the aspects of being a guide down in Costa Rica that he loves is teaching and watching people grow not only as fly fisherman but as a person. The first year I went to Costa Rica I struggled with a few more technical casting techniques at the trout fishery. He taught me these techniques, and I use them all the time in my personal fishing. Another part of Kevin that I absolutely love is his way of cheering everyone up and getting them stoked for what they are about to do. Kevin is one of the most humorous people I know and he uses that to his advantage. Kevin is an awesome guide but also will always have his family come first. He recently went back to Pennsylvania to help his father move into a new home and spend time with him.

Napoleon (also known as Napo) is one of the year round Tarpon guides in Costa Rica. Napo is one of the most passionate people I know for Tarpon fishing. A funny story about Napo is he created a bait trap across from his house where there’s a break in the water where the bait fish can relax. The whole point of this trap is so Napo can watch Tarpon eat bait fish while he’s hanging out on his dock or eating dinner with his wife. The first time I went fishing with Napo, he got a little mad at me because after my strip set I didn't set again so the fly came right out of the Tarpons mouth (for all the Guanaja students, he didn't get as mad as Rankin does). Napo handled it very professionally and with kindness. After my mistake he showed me what I should do next time. Once you  get enough time with him on the boat, he'll just start talking to you about life and experiences. Although, sometimes his spanish is extremely hard to understand, I love talking to him about life and the experiences each of us have had the opportunity to have. Napo is someone who is super easy to talk to and will spread his passion of tarpon to every one he meets. Maybe you’ll be lucky enough to make his collage of tarpon photos in his kitchen.

Kaylor, also known as Rasta, is another one of the full time tarpon guides in Costa Rica. Rasta is very quiet at first, but once you start to initiate conversation with him, he's a pleasure to talk to and learn from. He is one of the most humble people I know who loves guiding and putting people on tarpon. After the week I was a student leader, Rasta joined all the Fish for Change students, and I heard it was awesome having him there for his knowledge, kindness, and love for fishing. A story I like to bring up about Rasta is when Tom, Rasta, and I were going into the jungle to change one of the Jaguar camera traps. Rasta was sharing all of this knowledge about the plants that were around, spotted jaguar foot prints, and the rainforest. A funny part about the jungle is that Rasta never comes up with any mosquito bites but Tom and I came out of the jungle with over two dozen bug bites. Kaylor, as I mentioned above, is one of the most humble, knowledgeable, and funny person to know.
​
I can’t wait to get back to Costa Rica next summer for the 2023 programs and spend more time with Tom, Kevin, Napo, and Kaylor. I want to say thank you again for all the people who make it possible to have such an awesome opportunity for young adults to have these experiences and meet very influential people.

Cam Zirk, I’m currently living out in Salt Lake City, UT
Cam is studying Parks, Recreation, and Tourism with an emphasis in Outdoor Recreation Studies at the University of Utah. He is student leader for the Costa Rica program which I highly recommend and absolute love. I’m obviously passionate about fly fishing but outside of fly fishing in a back country skier, ski mountaineering, mountain biker, raft guide, and climber. I love teaching others about the outdoors and sharing my experiences/passions with others.