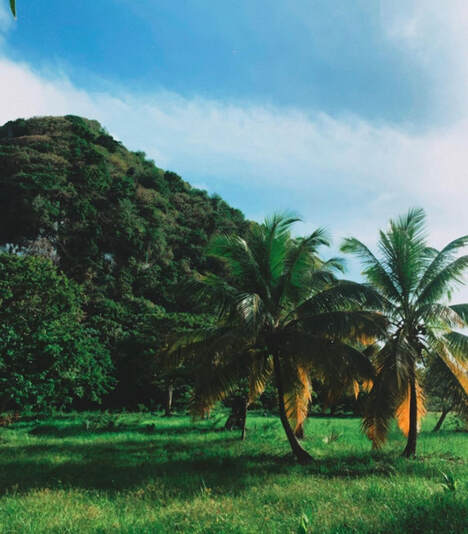 The twelve of us woke up at 6 a.m. sharp, full of excitement and as anxious as the first day of school. Patrick, an experienced Guanaja guide, Charlie, a charismatic trip leader, and I loaded our panga full of gear and headed southbound towards the latter half of high tide. As I was looking around, I could tell that these flats were full of boundless reefs, beefy bonefish, and beautiful open water. We stealthily pulled up to the first spot of the morning. I heard Patrick’s voice, muffled, but unmistakably clear under his buff, “Bonefish, 12 o’clock.” My heart was pounding, my hands were shaking, and all I could see was the school of fish, almost like tunnel vision. I made my cast. The presentation was rejected. The bonefish were gone. It was immediately evident I had a lot to learn from these saltwater flats. After a lesson on patience and preparation from Patrick and Charlie, I was able to regain the confidence needed for my next shot.
Film Photo by Julia Parrish.
Thirty minutes later, I was granted a redemption chance at two mudding bones. A perfect presentation plus a couple of quick strips…and just like that, I was hooked up. With Patrick and Charlie by my side, a quick fight, and a perfect net job later, the ghost of the flats was in my hands. Not only was this a fish of a lifetime for me, but the excitement coming from my two panga mates made the experience that much more rewarding.

That evening, back at the lodge, we were welcomed by a hard rain that lasted about an hour. Eight new-found confidantes spent this time under one of our porches catching up on the day and reminiscing on old ones. While discussing our native stomping grounds and traveling adventures, the conversations between the group were fluent, like we had known each other for years. And as if the day wasn’t special enough, I knew I had a lot to look forward to for the rest of the week because of the individuals I was sharing these moments with.
On the left is F4C college week students enjoying the secret fresh spring water fall on the island of Guanaja. On the right is Julia Parrish one of our college students holding one of the many local cats. Film photos by Julia Parrish.
Guanaja and its people encapsulate the true meaning of love, humility, and an unparalleled faith. With the feeling of success present on the first day, my priorities had shifted. I was able to open my focus to more than just finding the bonefish or feeding the permit and spend time learning about life on the island. No matter where the group traveled, whether it be to the island’s weekly soccer game, traversing through Mangrove Bight, or venturing to homes for delicious meals, we were always welcomed with a smile and favorable conversation. By the second day, I felt as if I could call this place a home away from home. By the end of the week, I felt as if I had family there.

Between the numerous juvenile tarpon, handful of bonefish, and the single permit of the week, the twelve of us experienced moments unlike any other and formed connections that are sure to last a lifetime. In the span of seven days, Guanaja taught me to appreciate the things I have and the things I don’t, how to wholeheartedly embrace cultural differences in no other way than diving headfirst, and what it means to be truly vulnerable. I could not be more grateful to be a part of Fish for Change’s mission that has and will continue to touch the lives of so many.

​When I think of Guanaja, I smile.

Julia Parrish; 22; Sandy Hook, Va.
Growed up with plenty of room to roam and some creative direction, instilled an insatiable passion for everything outdoors, travel, and art-related. Luckily, these things can go hand in hand. I was fortunate enough to explore Guanaja with an awesome group of people, college week, June 18-25. A time that will not be soon forgotten.