Photo: Knox Kronenberg
My trip to the island of Guanaja has changed my perspective on fly fishing and the community that surrounds it. It does not matter what background you come from or how different people are, the sport of fly fishing ties us together. At the beginning of the week, we were all strangers but by the end, I had made friends with everyone and I had even gotten to know some of the locals pretty well. A common passion such as fly fishing cements friendship quickly. Living in Hamilton, Montana, on the Bitterroot River, the strong fly fishing community is everywhere. I began fly fish when I was ten years old.  My grandpa showed me how to cast and mend. From there, I built up knowledge and experience in fly fishing which has led to meeting some of the best people in my life. Fishing will forever be a part of my life. I hope that in the future I could make a stable career out of fly fishing.

I had just come home from fishing streamers all afternoon when my mom mentioned to me about Fish For Change and the possibility for a scholarship. I immediately started my research to learn more about Fish For Change and its programs. I decided to fill out the scholarship form on the website. I worked on it for hours and didn’t turn it until late at night. I pressed the button to submit the form and knew that it was going to be a waiting game. Soon after I received an email from Heather Harkavy, the executive director and trip leader.  We scheduled a zoom interview that took place a week later. She talked about her passion for Fish For Change and how she became a part of it. She asked questions about my fishing experience and my thoughts on certain aspects of Fish For Change. Two weeks after the interview I received an email from Heather letting me know that I was awarded the scholarship! Now all I had to do was wait the four long months until my trip.  I started gathering my gear and prepped my fly boxes.  I was pumped for the trip.  The last few weeks before the trip passed in a flash. I was ready for Guanaja!

My flight arrived in Roatan and we made our way to the boat for  a two-hour long ride to the island. When we came into view of the island it looked pristine and untouched. My first impressions from the outside were amazing and throughout the week, I would discover the people who made up the island were just as wonderful. We arrived at the lodge around six o’clock and settled in. That night I went to one of the docks in town with Bodie who is an alumni. We were going after tarpon. We spotted a few but ended up not catching any. The next morning we started fishing. I had Rankin as my guide, He is a super amazing person. He told us stories on the boat, and we ended up catching a bonefish and missing a few triggerfish. We were done fishing by early in the afternoon. When we got back to the lodge, some of the other guys and I played soccer and swam. One of the things that surprised me about Guanaja was the freedom we had to go outside the bounds of the lodge. We were allowed so much freedom because of how safe of a community there is in Guanaja. Later that night, we went out and fished for tarpon in the dark. We still did not have any luck. 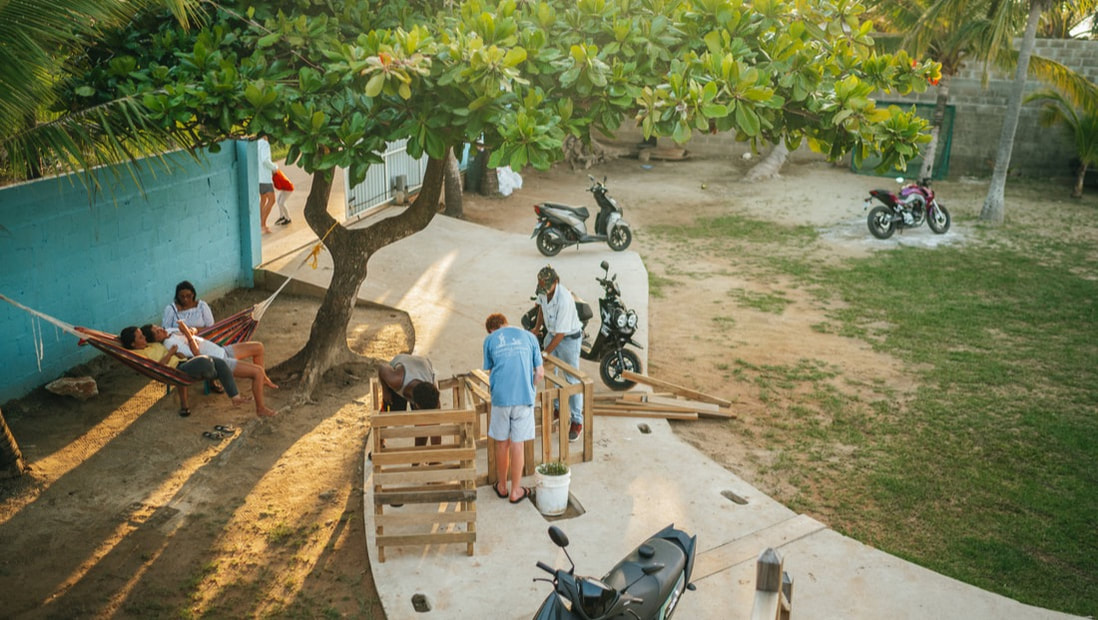 The next day we woke up early and fished the flats. No bonefish or permit were caught but we ended up making our way to a brackish inlet that had some juvenile tarpon, and small snook. Bodie, who was my partner for the day, caught a small tarpon and I was able to land a snook. We then went back to the lodge and played more soccer. That night we fished for sharks and I got the chance to hook and fight a nurse shark on a hand line which was one of the cooler moments of the trip. At this point, I had started to learn the names of the other guys and became good friends with a boy named Henry. Henry was native to Guanaja and had joined the program through a local scholarship. One of my biggest regrets about the trip was not getting his phone number so I could stay connected. His dream is to become a guide and his passion for fly fishing drives him which is something that we had in common.

Edwin was our fly fishing guide the following day. Jack and Henry were in the boat with me. The beginning of the day was slow until we came up to a school of bonefish. I hooked into a small 4-inch permit which I quickly unhooked and released. Then it was back to the bonefish. I made a good cast to one and he ate and made a big run and fought for a few minutes until he wrapped onto a dock post and snapped my line. In the afternoon we had a scavenger hunt around Mangrove Bight. Heather shared a list of activities and tasks that we would do for points around the town. The group with the least points had to wash dishes that night. My group chose to cast a net and catch snapper off of a dock which was 9-points. We borrowed the cast net from Henry's uncle. We netted a lot of bait and started to handline for the small snapper. A few stray dogs wandered by. I fed them some of the bait fish that we had caught. They were super friendly and stuck around while we fished. Eventually, we decided that we should try and get some more points for the hunt. We went to the local barber shop to get a hair cut for 15-points. I had the longest hair so the guys in my group tried convincing me to get a mullet, which I agreed to. Unfortunately, by the time we got to the barber shop and waited in line, the scavenger hunt was over. Disappointed in the missed points and the missed mullet opportunity, we headed back to the lodge. 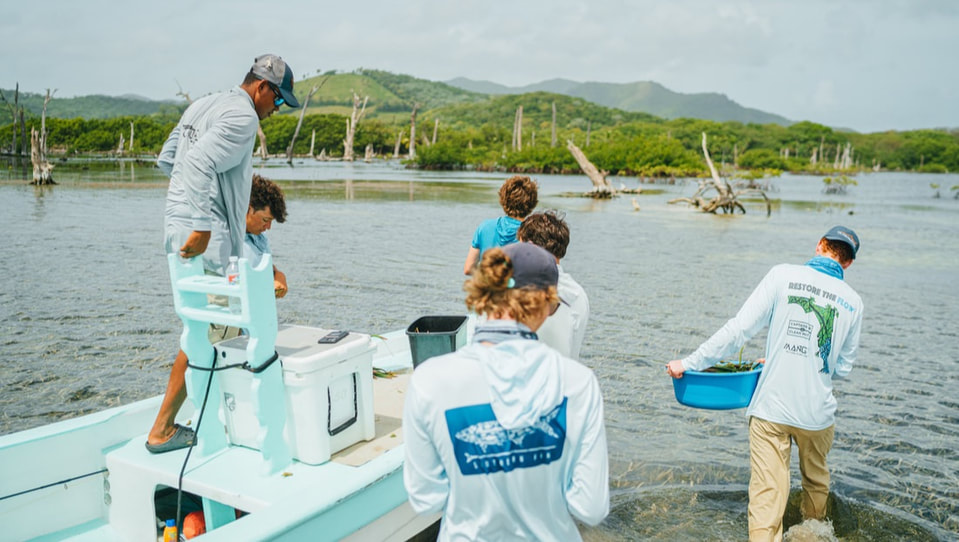 Students getting ready to go planet mangroves. Photo: Knox Kroneenberg
The next morning, Preston and I decided we should wake up at 5 and fish the beach outside the lodge. We saw Mason and Charlie casting at permit on our way out. It was cool to watch the trip leaders get a chance to fish. We made our way down the shore and came across three tailing bonefish, they swam out deeper as we were sneaking up on them. Preston went back to the lodge but I kept fishing. The same dog that I had fed the day before joined me in my travels and stayed with me while I fished. I didn't end up catching or seeing any more fish but the peaceful views in the morning and the dog's company made it worth while. Today was the day we were going to plant mangroves and spear lionfish. I was super excited. On the way to dive for the Lionfish, we picked mangrove propagules and filled three 5-gallon buckets. Propagules are the mangrove seeds. We then dove for lionfish on the reef. I had a chance to spear one, but missed. As a group, we ended up shooting three. After diving, we went to do the mangrove work. We took the propagules that we had picked and planted them in bags of dirt and put them in a greenhouse. We planted around 130 mangrove propagules. I learned a lot about the environment in Guanaja and how Hurricane Mitch had affected the mangrove population. We met with the woman who had started the conservation program that we worked with. She told us the story of how the program started and explained the importance of the mangroves for juvenile fish and their habitat. Helping plant the propagules made me feel like I was helping make a difference in the environment. ​
My time in Guanaja was the most enlightening experience I have partaken in. It has helped me realize that fishing is my passion and that I want to stay on the path I have set in my life. My biggest takeaway from the trip is that fly fishermen should educate themselves and help the environment. The experience has helped me grow and mature as a person by learning about other communities and people. It has made me realize how the passion of fly fishing brings people together in community.
Gavin Marston, 18 years old, Hamilton, MT
He is  passionate about fly fishing. Gavin have grown up fishing in Montana . It has allowed him to be involved in fly fishing and all that comes with it. Fish for change has allowed him to explore different aspects of fly fishing that he couldn't access before.