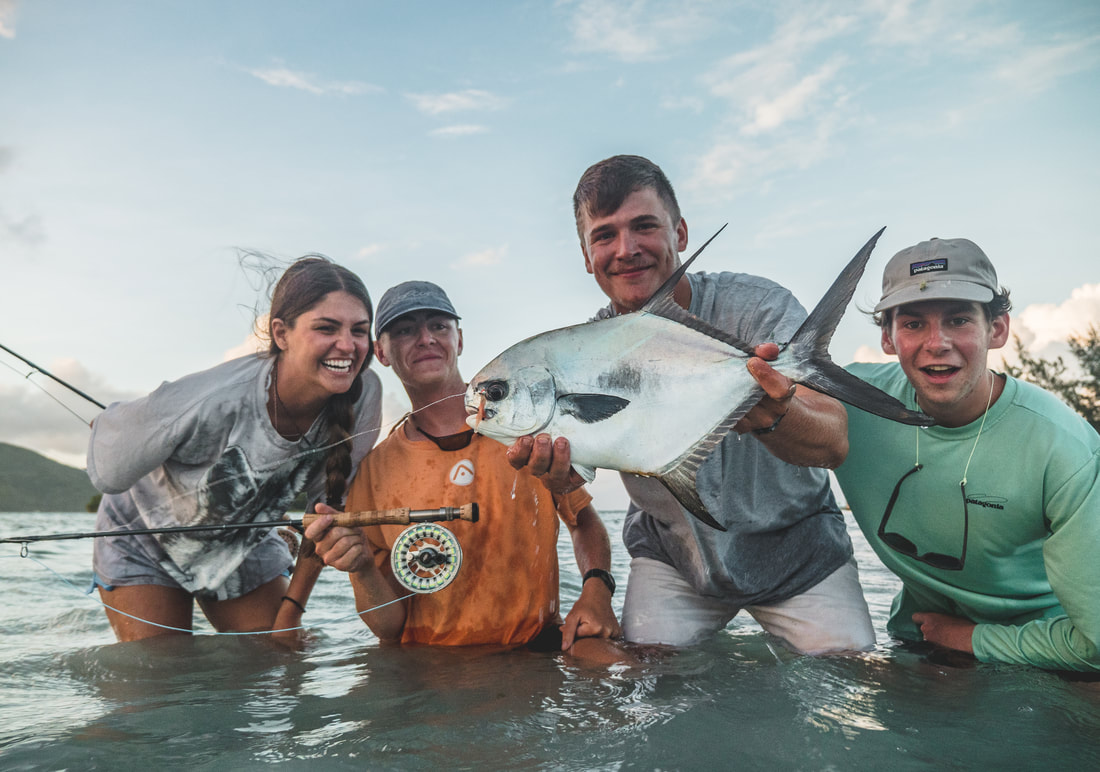 Fish for Change trip leaders celebrate Hagen Patterson’s first permit feet from the lodge. Photo by Rixon Media
I was 22 years old. It was November of 2017. We were at the Bonefish and Tarpon Trust annual Symposium and I was graduating from college in one short month. I had no clue how I was going to do it, but I knew I wanted to tie in my love for fly fishing, environmental stewardship, international travel and inspiring the next generation into my career path. That’s
when I met Steve Brown. I walked over to his Fish for Change booth at the event because there were actually kids my age hanging out there and I wanted to meet them. I had been going to events like this with my Dad my whole life and had
happily accepted that my friends were all going to be my Dad’s age. That’s when I met Noah Thompson and Hagen Patterson, the original kids and leaders of Fish for Change . We snuck out of the event, caught peacock bass in the pond across the street, and by the end of the afternoon I had been invited to Honduras the following summer. Steve was speaking my language and none of us knew what was in store for us.


That summer I found what I had been searching for my entire life: a group of ambitious, like minded, inspiring people who also found refuge in fly fishing. I found a dreamy, tropical island called Guanaja that soon became my home and the people—my family. The following year was monumental for F4C. The program in Guanaja became a 501c3 in order to provide scholarship opportunities, create a strong team, and grow the tangible initiatives we believe in. We went from 20
students to 100 students, and almost half of them joined us under scholarship. Alumni became trip leaders and passed on their knowledge as they found their own autonomy within the organization. Programs expanded past Honduras to Bahamas, Mexico, and Colorado. Word began spreading and boys, girls, young and old, Texas and beyond, became aware of our organization. We had kids from 14 states and 5 countries join us. We had weeks where 10 kids from different locations would walk into the week without a sense of community within the sport, and leave with a global one. Local students in each country participated and inspired everyone. Days were ​made up of fly fishing education, conservation projects, community immersion, writing and reflection. The goals behind F4C were strong and the fishing community was supportive. We had
ourselves an organization and we were ready to do our part to change the world. 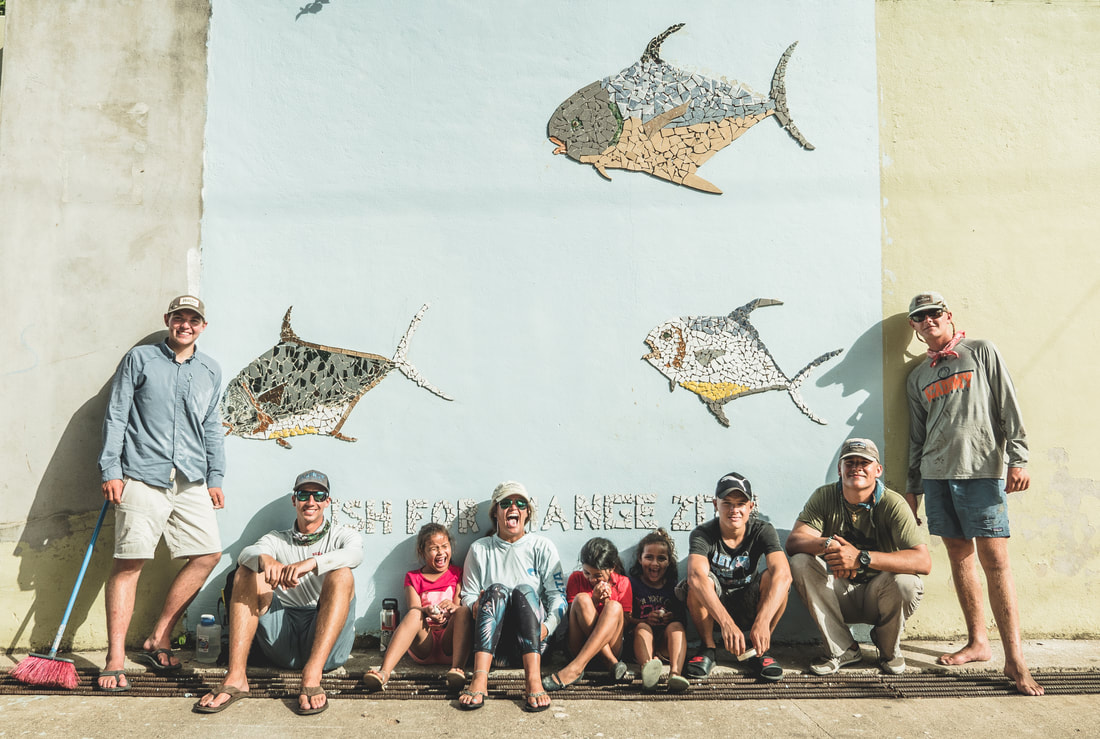 Everyone gathers around the newly finished Fish for Change mural in Mangrove Bight, Guanaja.
I could list our statistical growth and the powerhouse of a team that has made it all happen, but something that can’t be quantified is the fish for change GLOW. It’s an energy that shakes the walls of each lodge that’s overrun by
kids for the first time. It’s a certain wavelength that moves boys to bask in tech-free glory, using free time to invent new games such as hopping in barrels to roll each other down a bare hillside one by one. Its roaring dinner tables at the end of each week that make the quiet first night seem like an alternate reality. This glow is breaking the ice with bonfires, and laying on moonlit beaches under the stars in Mexico. It’s bonding over hand-lining, and one Bahamian student daring to
make his guiding dreams come true. It’s a bus-full of forty kids on I-70 in Colorado, beaming with their first float trip in sight. The glow is group chats amongst students being active years after trips are over as they continue to plan their next
adventure. The glow is me sitting here in the Rockies, sharing a home with three girls I met in Guanaja, reminiscing about it all, only to realize we’re all going to keep glowing and growing together.

The next generation is everything. It is up to them to protect our resources, be kind to one another, and pass on lessons to the generations below them. We recognize that through F4C we have the ability to educate a responsible generation of leaders and change makers and take pride in this precious position. Fish for Change is shaping future guides, policy makers, NGO board members, mothers, fathers, friends, and leaders. So on a final note, thank you all for being part of this powerful movement behind empowering youth in fly fishing. We are the future, so let’s make it a good one.
Heather Harkavy, 23 years old, Florida.
Heather is the Director of Operations at Fish for Change. Growing up in the f ly fishing community in Florida led her to pursue a life in fishing, education, and conservation work. Find her on Instagram @heatherharkavy.