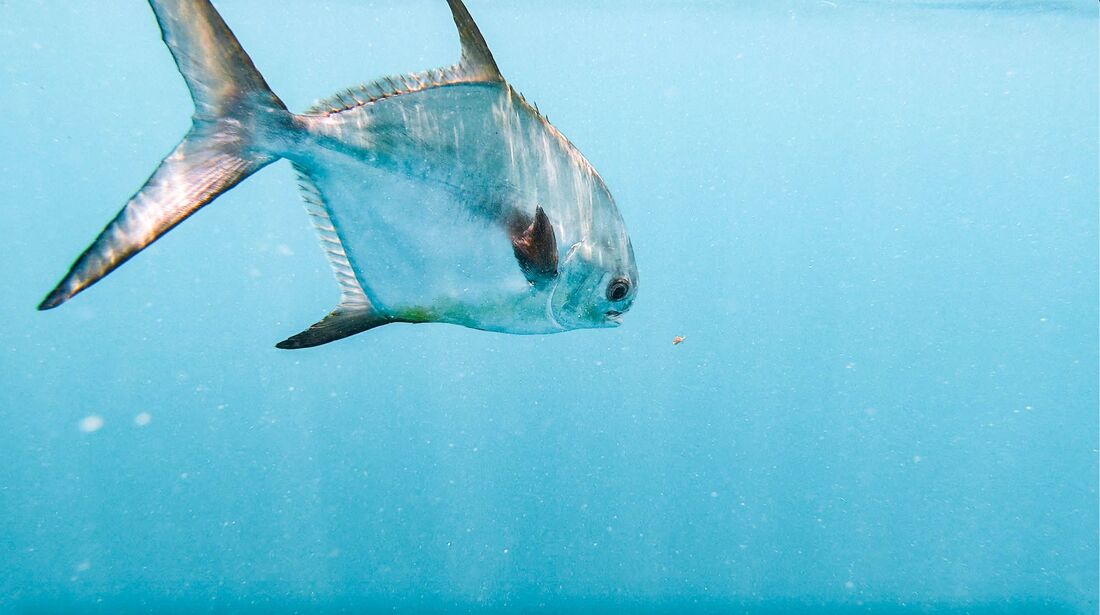 The beloved Pompa Jack, more commonly known as the permit. Photo by Knox Kronenberg.
Rankin killed the engine and slid the bamboo pole up the side of the panga boat as he rose onto his platform. With his raspy, deep, island accent, he scanned the windblown waters, gently poling the boat along, and whispered, “Life is so, so sweet.” His voice was barely audible over the howling wind. I stood atop a cooler on the bow and smiled as the sun struggled to peek through the thin layer of clouds above us. Flashbacks of the months of preparation and anticipation leading up to this moment created a montage in my head as I thought to myself, How the heck did I end up here?

Rod in one hand, line and fly in the other, my knees were bent as I hula-danced to keep my balance, rocking through the chop. The symphony of sounds made for the most perfect soundtrack to the motion picture surrounding me. I found myself getting lost in a trance, swaying back and forth waiting for the beloved pompa jack to show its infamous black fins and pink lips. In the same tone of a friend pointing out a large spider on your shoulder, Rankin’s calm but serious voice sounded,
“Ten o’clock, 60 feet, now.”

I made the cast.

My pulse increased and the stripping of my line matched my heartbeat.

Rankin’s accent faded, and I felt a sense of relief when I saw the fish move off my fly. I was still acclimating to this level of adrenaline.

Fifty feet under pressure ended up being more like a sloppy thirty.

He bent his knees and looked toward the clouds, undoubtedly holding back his reaction.

“Turn around girl, look at me. Take a deep breath and focus.” 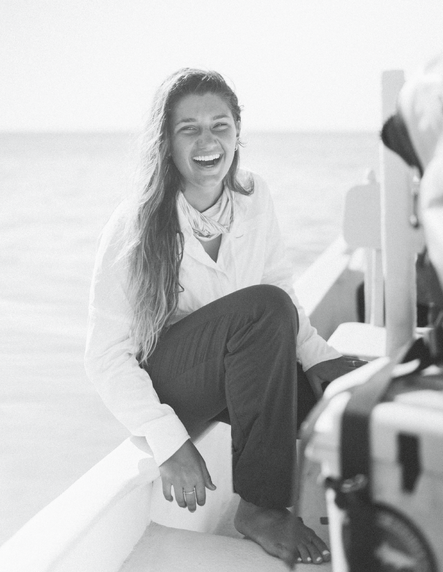 His eyes assured mine that someone too eager to land one of these beautiful fish was less likely to. His gaze rose as he continued to scan for Jack.

In thirty seconds, I had missed my chance, but my body was exhilarated by the intensity of the situation. I looked down at my shaking knees and brushed my clammy palms against my shorts. Roll cast. Deep breath. Reset. No more than three
minutes passed, and I heard Rankin’s voice again.

To my disbelief, my cast was fairly accurate this time. The fly hit the surface and began to sink. I ignored my heartbeat, as Rankin’s words echoed in my head, slowly, slowly, feed the fish. As the school approached in somewhat of a v-formation, they chased the Flexo- Crab fly. Rankin’s whispers were carried over by the wind.

​“Come on eat it, pompa, come on you. . .”
Portrait of Olivia Merlino by Meris McHaney.
Boom. My line went tight as I watched the closest fish take my fly. I gave a small tug to secure the hook in Jack’s precious, rosy lip. Chaos immediately followed, and in what seemed like two seconds, Rankin was off his platform, in the water,
and his bamboo push pole was somehow neatly in its holding place.

My friend, Meris, stood behind me, managing my line and talking me through the fight, barely able to watch. She wanted me to land this permit just as much as Rankin did, if not more.

One more spin of the reel with my left hand and I’d be fighting Jack from the reel. I swiped to spin it quickly, and the force caused the last bit of slack in my line to flip up and around the butt of my rod. Rankin splashed as Jack’s razor sharp fins broke the surface. Jack ran, but my line didn’t. I felt a pop, and just like that, Jack was gone.

I felt my body relax as I exhaled defeat and inhaled one deep, gratifying breath. Meris and Rankin dropped their shoulders, and we all swayed in silence for a minute or two, experiencing mixed emotions. The wind continued to scream, as the water slapped the side of the boat. With Rankin still in the water staring off into the north, and Meris’s hands atop her head, I stepped back up onto the bow as the corners of my mouth turned toward the sky. I may have just lost the fish of a lifetime but somehow I felt nothing but appreciation for the chance to be a part of something so much more than just fly fishing.

There have been just a few experiences in my life that have rearranged my list of priorities and changed the course of my life. If you asked me to describe them and their impact on me, you would probably get a poorly articulated but extremely passionate jumble of words. My Italian hands would undoubtedly be flailing around in the air, my eyes wide and my heart speaking while recollecting moments that have transformed my life.

These are the exact feelings I have about a seven-day trip to Guanaja, Honduras, made possible by Fish for Change and the support of Orvis. From the trip brochure, I was expecting to travel to a new country and learn more about fly-fishing while spending time volunteering to improve environmental and community health.

I am smiling thinking about the unforgettable experiences I couldn’t anticipate that existed between the lines of the published schedule. On paper, it was an effortless blend of everything I value: the outdoors, fly fishing, the health of the environment, new friends, and new cultures.

On the boat that day, we were each an integral part of a team of four. Rankin as our guide was responsible for directing the boat, spotting fish, giving me audible cues of where to put my fly, and of course, being my hype-man. Meris was my line manager, there to make sure it wasn’t getting caught on anything in the boat or coiled into an unruly nest. My job as the angler was to listen closely and trust my crew, to throw an accurate cast, and to manage my slack. And finally Jack had a job as well, to eat what was on the menu, if he so chose to. 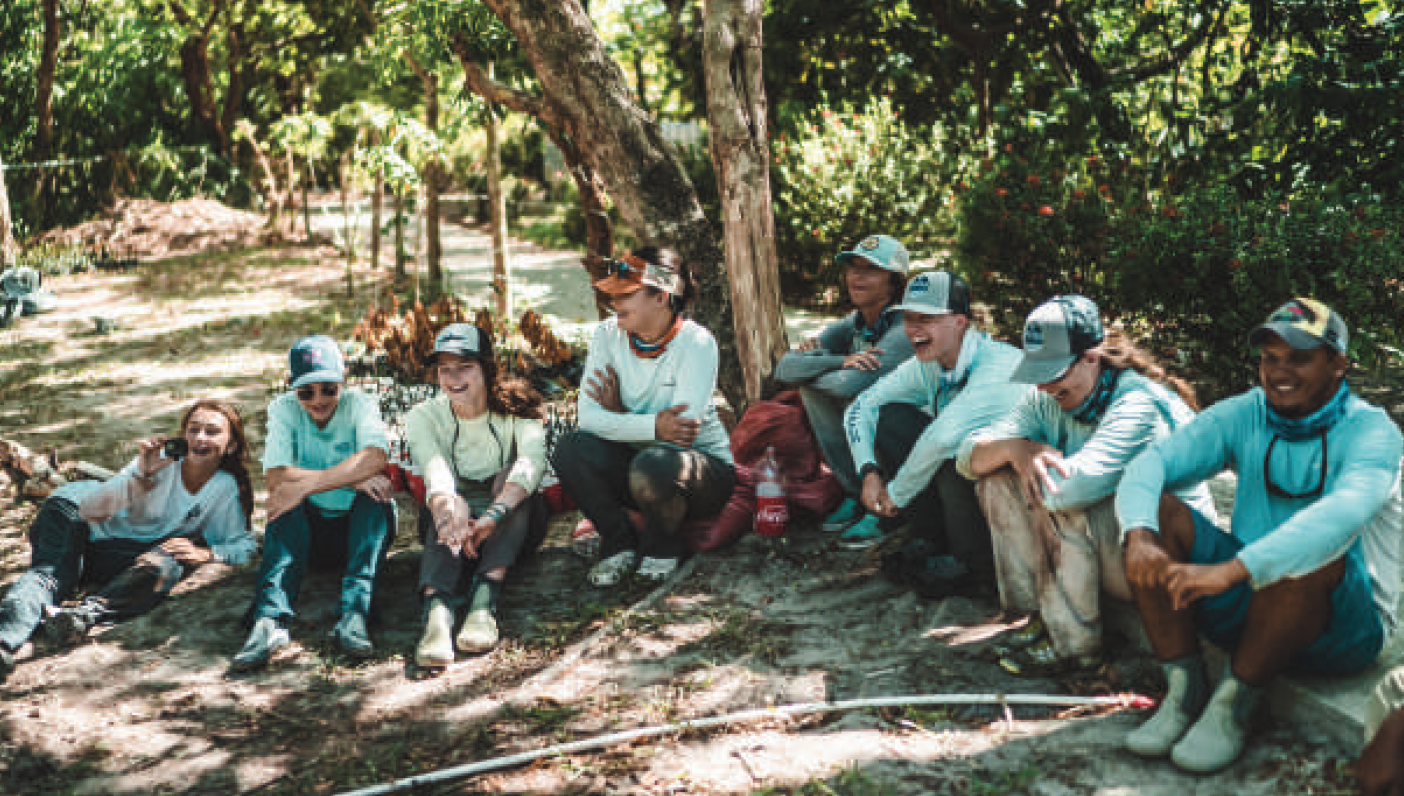 Laughter breaks out among the girls during instruct ion on mangrove planting. Photo by Mer is McHaney.
In June of 2019, twelve young women from seven different states and three countries came to Fly Fish Guanaja for Fish for Change’s first ever Girls Week.
I suppose in life we all have some variation of these responsibilities as well. It’s about embracing community—a framework of support—and when everyone does their part, glorious things happen. At the end of the day, there are unforeseen events that no team can anticipate. Yet, the community we build along the way is there to help us rebound from share in any disappointment. The stronger the camaraderie, the stronger the community. And with a stronger sense of community, not only are the good times more glorious, but each heartbreak grants us more resilience.

A community of 11 girls was brought together because of a passion for fly fishing. However, this passion is no longer just a passion for us. It became a way to connect to a foreign community that somehow felt so much like home. It gave purpose to something that was a piece of our identities while benefitting everyone involved. Most notably, it became a mechanism for change. It created a space where fly fishing was a method to bridge race, religion, class, beliefs, political views, and more. Fishing is no longer just fishing. It’s fishing to connect to each other and to the precious environments that provide us the backdrop to do so. Fishing now means to conserve our ecosystems, to never lose curiosity in the world, and to refuse to stop learning about each other and ourselves. Simply put, it’s Fishing for Change.
Olivia Merlino, 23 years old, California.
Olivia joined us under the Orvis Scholarship last year as a student. Olivia now leads trips with Fish for Change. When she’s not fishing Olivia enjoys surfing, backpacking, and good company. Find her on Instagram @merlinoolivia.