Links of Life
By Sebastian Sawhney
Sports—a universal language. Photo by Knox Kronenberg.
As I sit under a palm tree of one of the schools in Guanaja, I experience a scene that is vaguely familiar to me—the giddy excitement of school children running around, chasing us down for our hats and kicking soccer balls across the field. It was exactly the same joy I felt when I was in kindergarten. I took a brief pause from counting over and over again in Spanish, and
tried to just appreciate the moment.

As fly fishermen we spend so much time immersed in the sport, we seem to forget how amazingly lucky we are to be able to do it all in the first place. We are doing something traditionally used to obtain food, adding artificial barriers to make it more sporting, then traveling to some of the most beautiful, but poorest, countries in the world to do so. Fly fishing sometimes seems so far out of the world of the people who actually inhabit some of the locations it is practiced in,
however, Fish for Change has taught me the benevolence that comes with the sport.

I remember some stories my grandmother told me. She told me about how her elementary school in India didn’t actually have a school house. All their lessons would be taught under a tree. Paper was scarce, and chalkboards were shared. She reminisces on the memory fondly, however, I could not imagine someone so intelligent as her, not having the same resources for education as I did.

Her passion for helping others and desire to change the circumstances around her lead her to pursue the study of medicine. Being a woman in her era meant to even be considered for medical school acceptance, she had to be extremely academically qualified. She studied extremely hard and ended up ranking first out of nine thousand girls in her region. Her academic achievement allowed her to attend the newly founded Maulana Azad Medical College in New Delhi. After medical school she moved to Orange, Connecticut with my Grandfather.

Her time as an anesthesiologist allowed her not only to provide for her three children but to ease the pain of surgery​ for thousands. The resources and the emphasis on education allowed my father to attend some of the country’s top universities and get a high paying job. Education was essentially responsible for my entire lifestyle. Without education, I would not have the quality of life to even consider participating in a sport like fly fishing, two generations later. 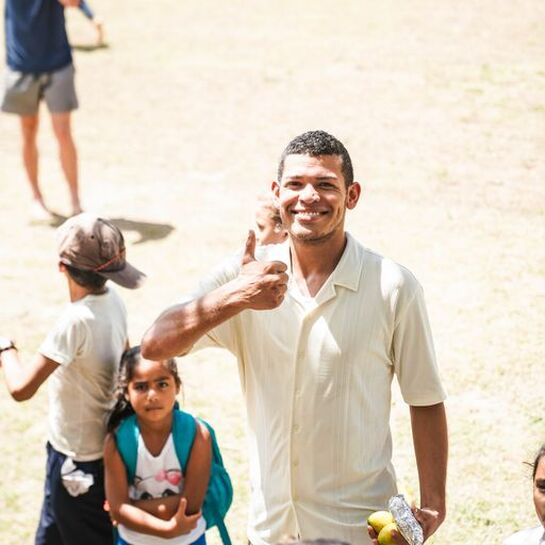 As I waited for my tuk tuk back to the lodge, I conversed with Heather and my roommate, Jacob, about how we could raise the two thousand dollars needed to build the school an entirely new computer lab; a project suggested by Ivan, the twenty-one-year-old teacher.

Ivan was so inspirational because at such a young age, he had taken responsibility for the education of hundreds of children. We all, especially Heather, felt a kind of manic excitement as we knew how doable it would be to raise the money that would have such a profound impact. Sitting at the lodge less than twenty minutes away, there were fly rod and reel combos that cost almost that amount. Sitting on the dock hours later, it took only a few ​phone calls and Instagram posts to raise the surplus amount of money. I remember trying to explain to my friends how an amount of money that was probably insignificant in their daily lives, could impact someone so greatly.
21 year old Guanaja school teacher, Ivan Moore, leads his students
with passion, evenduring recess. Photo by Knox Kronenberg.
“The differences between the school my grandmother attended in India and the school in Guanaja are not in substance but in aesthetic. Swap mountains for palm trees, and Hindi for Spanish and they are both still made up of people.”
Visiting Guanaja gave me the opportunity to not only examine the effect education has had on my family, but also how intrinsically similar people are regardless of geography.

The differences between the school my grandmother attended in India and the school in Guanaja are not in substance but in aesthetic. Swap mountains for palm trees, and Hindi for Spanish and they are both still made up of people. Much like my grandmother, the people of Guanaja have taught me so much. During my time in Guanaja, I learned so much about living more harmoniously with nature. Seeing a community that was so close knit, allowed me to genuinely reflect on living in a society that is so fractionalized.

Education gives people the power to pursue what they love andmake the world a better place. My experience with the computer lab showed the potential that people associated with Fish for Change have to help others.

If every Fish for Change trip attempted to improve educational qualities for the people of Guanaja, Campeche, and Abaco, who knows what these extremely hardworking and community-oriented people could do. They could become doctors and save people’s lives, or biologists and protect the environment that we all care about dearly. The possibilities are seemingly endless. Who knows? Their grandkids might even be fly fishermen.
Sebastian Sawhney, 17 years old, New York City.
​Although from the city, Sebastian has always found peace in f ly fishing for
stripers in the NE and throughout the Florida Keys. Sebastian will be attending George Washington University in the fall of 2020 where he will be pursuing law. Find him on Instagram @sebastiansawhney.