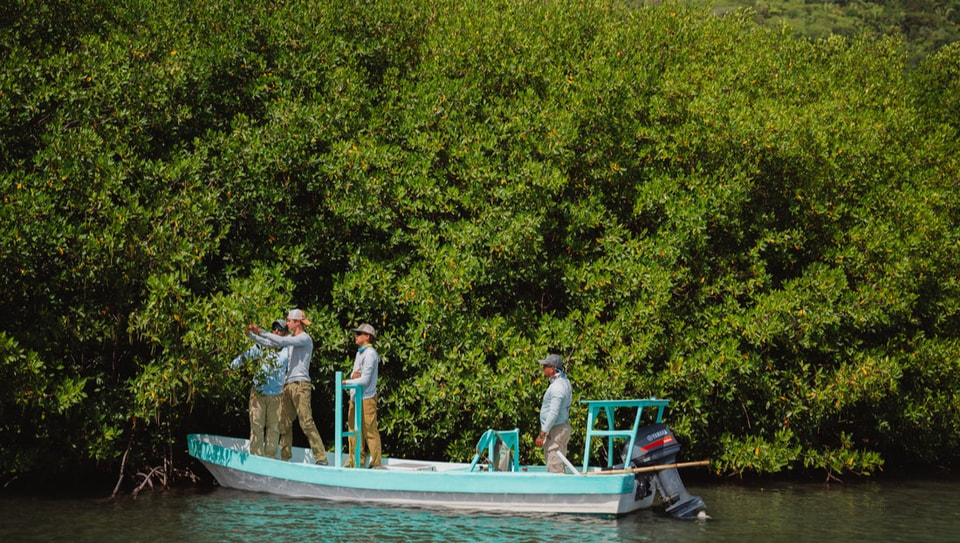 This is Jack, Junior, and Juniors friend exploring and having fun in the town of Mangrove Bight. Photo: Knox
I attend a private Episcipol school in Austin, meaning I attend chapel every afternoon. Admittedly, I am not the biggest fan of school, so during chapel, I usually find myself not paying attention; Although at the end of every service, everyone stands and recites the school prayer. The school prayer I also find myself not paying attention and just mindlessly reciting the words, which I also never give much thought to, Besides one line that always catches my attention. The prayer states “with open minds, open hearts, and open doors we pray to you lord.” I have never really comprehended the possible significance of this line and its potential impact on my life until I spent two weeks of my summer in Guanaja, learning what it means to live with an open mind, an open heart, and an open door. ​

My good friend Charlie and I have been coming to the island for three years. Each time better than the last, but every time I feel like there's always more I could have learned from the island life. So this summer, we decided one week was not enough, and we stayed for two. For our first week, we reached out to a local family in hopes that we could live with them and experience something truly special. ​

After a long day of travel to Guanaja, Charlie and I began our week of eye opening cultural exchange along with one amazing experience after the next. Immediately after we arrived on the island, we were greeted with open and loving arms, not just from our new family but from the entirety of the town surrounding us. It felt as if we were arriving as members of a family rather than guests for our two weeks as islanders. 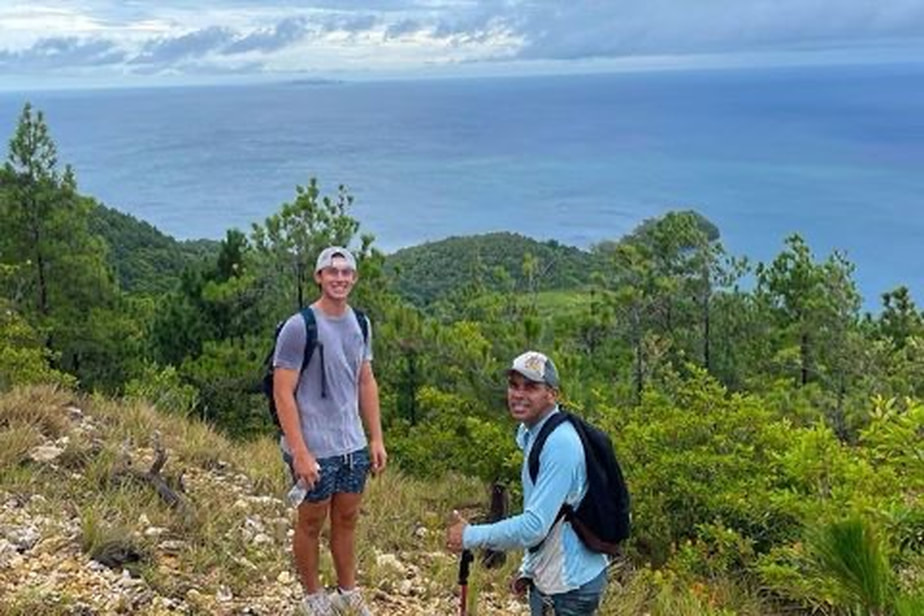 This is Jack and Ray on the highest point of Guanaja.
For my two week stay I challenged myself to live openly, to dive deeper into the Island state of mind. We decided on the second day that we would summit the highest point on the Island. Our tour guide, once stranger but now our good friend Ray, guided us to the top. After talking to Ray, I can confidently say that  he 100% embodies what it means to live with an open mind. His story is beyond empowering, Ray became paralyzed from the neck down and was told he would never walk again, but years later, he summited a 1500 foot peak with some gringos in under two hours. It was absolutely mind blowing that because of his open mind and love for the world, he was able to will himself back to physical health. On the way up, he told us, “I was on the top of the world before my accident,” but when saying that his smile never left his face. That felt odd to me, why was this a good thing? After continuing to talk to him I could tell that he doesn’t feel sorry for himself and does not dwell on the past but instead he looks to the brightside and is simply able to see the light at the end of the tunnel. While he may have slowed down a bit after his accident, he never stopped and knew that he would be able to find himself pursuing his passions once again. This was made clear to me when we hit the top of the island and all let out screams of joy. As the wind hit our face and we overlooked the ocean, I could see Ray not only put himself back on top of the world mentally, but physically as well. Ray taught me that overcoming hardship starts with the mind way before it concerns the body– that by allowing your mind to visualize and understand your idea of “success” through subconscious affirmations of gratitude and love for what you have rather than what you do not in order to create a headspace worlds better than the headspace of the average American or “close minded” individual. Seeing how the locals take nothing for granted and have appreciation for all they have will 100% prove to be one of the most valuable lessons I could have learned.
On the left its Jack and Kendell landing a bonefish. The photo is Charle and George with fly fishing guide Kendell and Patrick picking mangrove off to get them planted.  Photos: Knox
Next, I came to understand the importance of living with passion and an open heart.   My brother Kendell Powery would come to the lodge every morning with genuine excitement. Every day he was determined to have a great day on the water, chasing down and catching fish. I am pretty positive that I can speak for everyone who has fished with Kendall that he is just an amazing dude to be around, especially while fishing. He showed me what It means to live with an open heart and enjoy doing what makes you happy. On the morning of our last day, with hopes to have an insane last day, Kendell, Charlie, and I went out on the water. Almost immediately, Charlie and I both had sick permit shots, and I ended up getting my first permit to eat but couldn’t stick the hook (but that is not the important part). As we moved from flat to flat we rolled up on a small key in search of schooling bonefish, but instead, we found a school of tailing permit cruising along the edge of the flat. I don't even want to begin to think how many days Kendell has gone out fishing or the amount of permit, tarpon, and bonefish he has come across. But as soon as we saw that school of permit, his face lit up, and we all started going crazy and being “fishing nerds” over how insanely sick seeing those fish and taking those shots were. To the average person, it would have seemed as if Kendall had never seen a school of permit before in his life because that man was so genuinely stoked that we even found those permits. It was clear to me that I was witnessing pure passion. That feeling was infectious because it rubbed off on both Charlie and me. I can honestly say that was the most fun and unreal day of fishing I have had in my entire life, and we didn't catch a single fish. Kendall’s passion and love for being out on the water was truly a spectacular thing to witness because it showed me that I cannot settle for anything less than to be happy with what I do and how I live my life. What I learned from Kendall, simply, is do what you love and love what you do. That is the key to living with an open heart.

Lastly, I learned what it was like to experience true open doors. Charlie and I reached out to Sheera with our crazy plan a few weeks prior to the planned trip and without hesitation, we got the go ahead to plan our week which I referred to as our “real islander week.” This week, Charlie and I essentially became islanders (major check off the bucket list). We summited the island's highest point, we sought out fish and caught fish on our own for the first time in that environment, and we saw the island from a completely different point of view. To me, it felt as if we were seeing it from the inside rather than the outside – which it sometimes felt like when staying for such a short time years prior. Our island family showed us to live with an open mind and always assume the best. In America it seems people live with a protective wall up when it comes to hatching relationships thus leading to shallow meaningless connections. I created deeper and more meaningful relationships in the 2 weeks I lived on the island than some relationships back home in Austin that I have been hanging onto for years. The culture is just worlds different from America. I almost feel empty going back home because the culture shock just slaps me right in the face. When walking the streets no one smiles and waves, everyone is consumed in their phones or other devices and it hurts to see it.

​Going into this week I sort of knew what to expect, I knew there would be a lot of fun adventures, a lot of laughs, and a lot of insane experiences, but what I did not know was that I would be leaving with a whole other family. Sheera took Charlie and I in as her own kids and made us feel at home in such a foreign place.  We were shown their customs, their traditions, and introduced to things such as “island time”. I saw and did a lot of crazy but awesome things in my two weeks on the island, but to me, nothing tops the fact that a once stranger (now island mama) opened her heart, her mind, and her door for two trouble-making gringos who love catching fish and going on adventures, and for that, I am forever grateful ❤.

Jack Mabley lives in Austin, Texas
where he finishes up his senior year of high school. He has a passion for sports, specifically basketball, as well
as fly fishing, music, and hanging out with the boys. He is a 3 time returner to the island of Guanaja, Honduras where
he has built amazing connections and caught some awesome fish. This previous summer he spent time living
with a local family and now has the right to call himself a "part time islander!"
​​