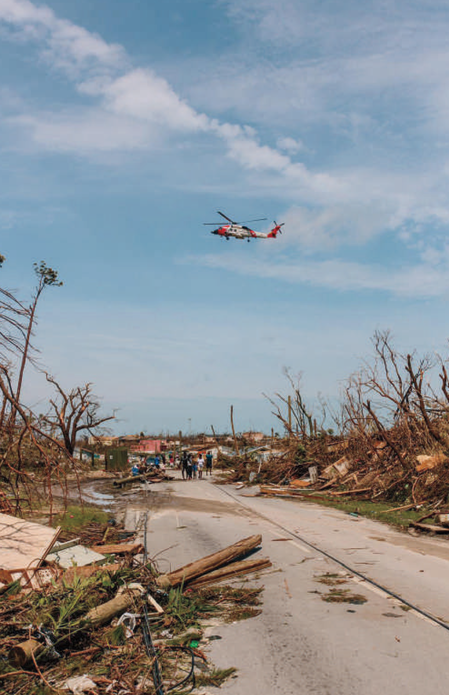 ​I tracked Hurricane Dorian for weeks. It is pretty typical for early
storm tracks to show hurricanes making landfall on Abaco, so I did my best to stay optimistic for the two weeks leading up to the storm,
hoping it would be another false alarm. On August 30th, a direct hit
on Marsh Harbor was imminent. I sent a text to one of my best friends on Abaco, Travis Sands, aka “The Flats Phantom”: “What’s your plan bro, you gonna ride it out?”

“It’s not looking good...thinking about it,” Travis texted back. “It looks real bad...Just let me know if you need help getting out today or tomorrow. I can call a family friend who is sending over planes,”
I offered.

“I will let you know,” Travis answered, “gotta talk to my girl and see how her and the baby are feeling. We may just have to meet up somewhere if we do”.

I didn’t sleep a wink that night. The following day, Saturday, August
31st was the home opener for Texas Longhorns football. Being raised in Austin and now being a senior at UT, this was supposed to be one of the best days of the year. But not this year. My mind was fogged with thoughts about my second home, and all the amazing people that call Abaco their homeland. Just before heading out to the tailgates, I got a text from Travis:
​“Bro I would love to get out but can’t. My 7 month baby girl can’t travel. Her passport is not complete, so will have to ride it. Fingers crossed,” he reported.

About an hour later I feel my phone buzzing in my pocket. I took it out expecting one of my friends to be calling and asking where we were and what our plan is for the game, but it was Travis. I answered and was greeted with the sounds of howling
wind and rain. Amongst the ruckus I could hear Travis’ voice saying, “Jake, bro, this is really, really bad. power already gone out and there’s water in the street. I’ll do my best to let you know what’s going on.” Our conversation lasted about two minutes, then the signal cut out, and the island went into blackout. All we could do was sit and wait to hear something.

My family history with Abaco goes back multiple decades. My grandparents first visited Green Turtle Cay in the late 1950’s, and built a house in a little community called Treasure Cay on the main island in the early 1970’s. Since then, people across the island have accepted us, the Woods, as family. We have relationships with people on the island that will last a lifetime.
In an effort to give back to the island, my sister and I started a non-profit called Austin Serving Abaco in 2012 that was geared toward providing the local kids an opportunity to attend school.

We quickly expanded, and now hold clothing, shoe, and backpack drives every year. On top of visiting the island with family and friends as much as we can during the year, we host a group of Austin high school students every March to do service
work. In the Summer of 2018, while sitting in the living room at Fly Fish Guanaja, Steve, Heather and I hatched a plan to bring a Fish for Change student program to the  Bahamas and try and impact the same kids I had known for ten years from a different angle.

​Naturally, these kids were the first people that came to mind when the storm hit. I had no way to talk to them, and could only imagine what they were going through, as most of their homes are built from plywood, and sit really close to the Sea of Abaco and the Northern Marls, putting them at risk for major flooding. Those who didn’t live near the water lived either in town, exposed to wind damage, or a large piece of private land further North called The Farm. All I could hope was that everyone either went there, or into the churchturned-hurricane shelter.

Shortly after the storm passed over the island, helicopter photos started to show up on the news and on Facebook. What I saw were images that I could not have prepared myself for. Places where some of my most pleasant childhood memories
were made: destroyed. Abaco Lodge, a place that helped jump start my fly fishing career and provided me so many connections: in rubble. The Sand Banks community, home to so many friends and young children who had permanent smiles on their faces: completely washed away. Somehow, by the grace of God, our long-time family home remained standing, which revealed to me a glimmer of hope amidst a scene of total destruction. I made contact with a few friends on the island and they did not provide good news. All the roads from Marsh Harbor-North were flooded. There were bodies in the bushes and mangroves, and almost everyone had lost everything. However, aside from the damage, my mental state was most affected by the first missing persons list that came out. Multiple Abaco Lodge staff members were near the top of the
list, including Travis. Worried, I sent him another text: “let me know you’re ok as soon as you can”.

Hours passed. Days passed. Nothing. I spent that next week following the storm at my house on campus. I couldn’t go to class. I was on the phone for most of each day with gracious people trying to help as well as talking things over with Oliver
White, the owner of Abaco Lodge. Finally, I got a call from a Bahamian phone number – a pleasant surprise. On the other end
​was Abaco Lodge head guide and all-around incredible person, Paul Pinder. Paul guided me to my first permit, the biggest of that season at Abaco Lodge. He had been fishing with me once or twice a year for about five years and taught me the importance of bonefishing for him and his family, and what the island means to him. Paul lives in Sandy Point, the southernmost town on Abaco, an area largely unaffected by the worst of the storm. Paul had been managing the hurricane shelter and told me stories of the pandemonium. In spite of this, it was comforting to hear the voice of a friend. I asked if he had seen or heard from Travis, to which he said no, but had heard rumors that he was okay.
Photos by Dan Zazworsky.
About a week after the storm, my parents went over to the island to begin helping with relief and to check on friends in addition to the house. I got phone calls from my mom, sobbing, and my dad, who usually keeps his cool, worried and in shock. None of this helped the negative mindset I had been carrying for the two weeks prior to Dorian. When they got home,
we had dinner and talked over our options. So many people offered their assistance. We were working with plane charter companies, locals, and many others in Florida and the Bahamas to try to get supplies and necessities to Abaco as quickly as possible. My parents and sister returned to Abaco a few more times throughout the rest of 2019, but progress was slow.

The Saturday three weeks after the storm, September 21st, was another Longhorn Football Saturday. Spirits were high and it
was a beautiful day. At around two in the afternoon, my friend and roommate, Knox, and I were sitting on our back porch. My phone rang: incoming call from Travis Sands. At this point, most of the people I knew had been accounted for— Travis was the last one.

Travis and I talked for about twenty minutes. He and his family were safe in Nassau, and he told me stories of him swimming through downtown Marsh Harbor, helping women and children reach safety as the water rose. Pitbulls that got
off their chains were fighting for their lives, and gunshots ringing amongst the utter chaos that had occurred. If you know Travis, you know how much he loves his GoPro camera. He had taken videos of himself swimming through houses and streets, and filmed the wind and rain that Dorian brought. They were bone chilling. I asked Travis when he planned on coming back to Abaco, and he said he didn’t know if he would. He has since gone back home to Andros and has continued guiding with the same charisma and passion for fly fishing the flats that he had when I met him many years ago.

The world is full of gracious people, and with the help of social media, we raised money through Austin Serving Abaco that went directly to relief efforts such as the purchasing supplies and fuel for planes evacuating people, and transporting necessities to the island. The island itself has also started rebound quickly.

Power has been restored in many areas, people are flocking back to Abaco, and rebuilding efforts are happening across the
islands. As for the fishing, The Delphi Club, home of future Fish for Change Abaco programs, is up and running. Max Woolnough, general manager of The Delphi Club, told me their fishing has been incredible, as the bonefish are present in large, healthy numbers. With so many new areas to explore, and so little fishing pressure for the next few years, the flats fishery around Abaco is poised to jump to a new level of epic. That’s the thing about hurricanes: they have a way of turning everything you have ever known on their head, but, they provide an ecological reset that allows for the flora and fauna
of an area to flourish untouched, showing the fight and resilience of the ecosystem.

I believe that the bonefish of Abaco are a symbol of hope and resilience in wake of disaster. The fish aren’t leaving. They’ll thrive as the ecosystem resets and angling pressures decrease. Of course, things will be different. But, in the end, they’re still going to frequent the flats of Abaco, looking for their next meal—be it a crab, a shrimp, or some lucky angler’s fly. The same goes for the people of Abaco. The near future is going to be hard, as clean-up and rebuilding projects are in full swing, which will likely take many years to complete. But the contagious joy and welcoming spirit of the locals won’t change, and I can’t wait to see the smiling faces on the local kids in the classroom, on the soccer field, on the basketball courts, and on the water once again.
Jake Wood, 21 years old, Texas.
​Jake went to Guanaja for the first time at 15 years old. At 21 he pioneered our Abaco program. Jake will be graduating from UT this year and pursuing a career in commercial realestate and f ly fishing. Find him on Instagram @jakedwood14.