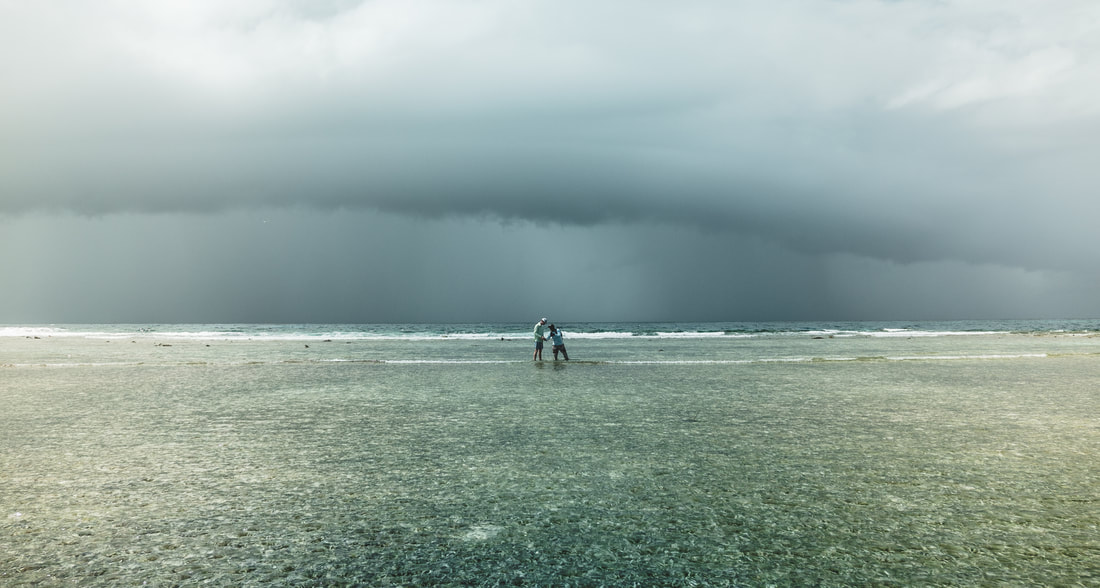 Photo by Rixon Media.
Looking back at my childhood, most of my memories involve the outdoors. I grew up in a suburban area of Johannesburg, South Africa’s largest city. It is an economic hub that is preoccupied with consumption and development; people move here for job opportunities and higher paycheques. Money incentivises. Skyscrapers and shopping centres, like invasive weeds, are overgrown and spreading. The grey smog that looms above these buildings adds to the claustrophobia of the whole city.

​It’s almost unsurprising then, that most of what I remember as a child involved sports fields, our backyard, and weekends away from the concrete gargoyles littering the skyline. Nature was, and continues to be, my escape.

I view South Africa as a paradoxical paradise. It has deep veins of history running through it, many of which carry uncomfortable conversations and stories. Conflict, oppression, and segregation.

A large portion of our recent history could be summed up in those words. The damage caused by previous generations
has left wounds that are anything but healing. The band-aid, that was the post-’94 Nelson Mandela led democratic government, has slowly been pulled back revealing sores. Festering to the bone, they have been left unattended for too long. An unwillingness to have conversations around this history has left us in a state of perpetual limbo; vulnerable to hate-speech and fear-mongering.

The once world-acclaimed Truth and Reconciliation trials are looking more and more like an agreement to disagree, a shake of the hands between two begrudging siblings. Our shared history isn’t really shared at all.

At the same time the world frequently reminds us of the vast beauty we have. Cape Town, our Southern most city, is often ranked among the most beautiful cities in the world, whilst unique and extraordinary wildlife continues to draw thousands of tourists annually. Our subtropical climate along with our ivory beaches and expansive coastline makes​us a beach goers haven. Bordered by the Atlantic and Indian Ocean, which meet in a violent display at Africa’s southern-most point, there is a tangible force behind our natural wonders. Not just natural beauty though, South Africa is celebrated for its multicultural and inclusive society.
​ 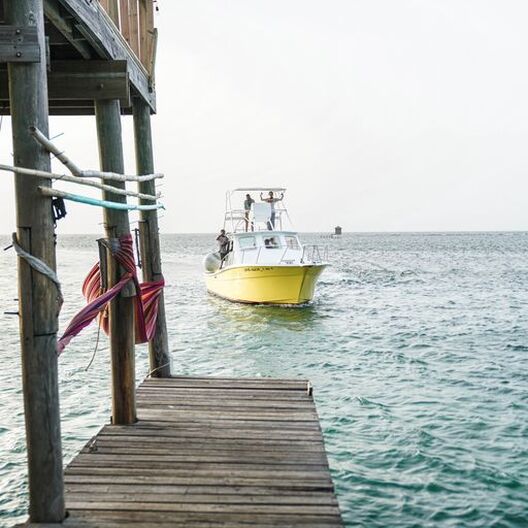 Having eleven official languages is a testament to this unparalleled diversity of culture. Women make up exactly half of our cabinet positions, in contrast they hold just under 24% of the seats in the United States senate. Our national anthem employs five of the most used languages in South Africa, another symbol of the rich culture we are surrounded by. Truly, South Africa is beautiful, and it is not. A paradise that in itself is a paradox.

In the build up to my month ahead on both Roatan and Guanaja, two of the three Bay Islands off the coast of the mainland, I spent a fair amount of time scouring the internet for information on all things Honduras. It painted a somewhat bitter-sweet image: iridescent azure saltwater bays, trophy sized atlantic permit, a culture I knew very little about but also a country in the midst of some fairly volatile and unpredictable protests, together with one of the highest murder rates in the world.
Photo by Knox Kronenberg.
"White sandy beaches and coconut trees might serve as the postcard, but the real secrets these places hold are the truths we as travellers can choose to ignore."
After some more digging and reaching out to some people, who were actually on the Bay Islands, it became clear that the protests and drug-related violence were restricted to the mainland. I packed my bags and started my fifty-two hour journey from Cape Town to Roatan Island, Honduras. I had booked myself in at a small backpacking hostel and my plan was to fish DIY style for three weeks around the island, saving money wherever I could.

After that I would join up with Steve Brown and the rest of the group heading to Guanaja for the college week of Fish for Change. My fourth and final flight into Roatan was breathtaking. All I could see for kilometres was a shipwreck stricken coastline with wadeable flats flickering in the midday glare. The hostel I stayed at was in a suburb called Sandy Bay, rather quiet and not at all touristy. Heather had recommended it and I preferred the fact that the beaches closest to me weren’t going to be full of swimmers and water-taxis. The three weeks that followed played like a highlight reel. I met incredible people on the island, fished with someone who claimed to be a gunrunner, got my hands on my first permit and learned so
much about the fishing as well as the island.

While on Roatan I was told that the Bay Islands were once occupied by the British while the mainland never was. In fact the mainland had its routes in Spanish occupation. You could notice some people on the Island spoke only English while others could only speak Spanish. It also became hard not to notice the stark contrast between La Colonia and West End, the tourism hub of the Island. Densely populated informal settlements scattered the Island, hiding behind huge resorts with infinity pools dripping into the Atlantic ocean.

Skipping from one satellite island to the next, Roatan slowly slipped below the horizon as we, the penultimate Fish for Change group of 2019, made our way to Guanaja. As the least visited of the Islas de La Bahía, information on the island had mostly eluded me. ​Outside of the sand-fleas, marled flats and a lack of tourists, I knew very little about the Island or its
history. 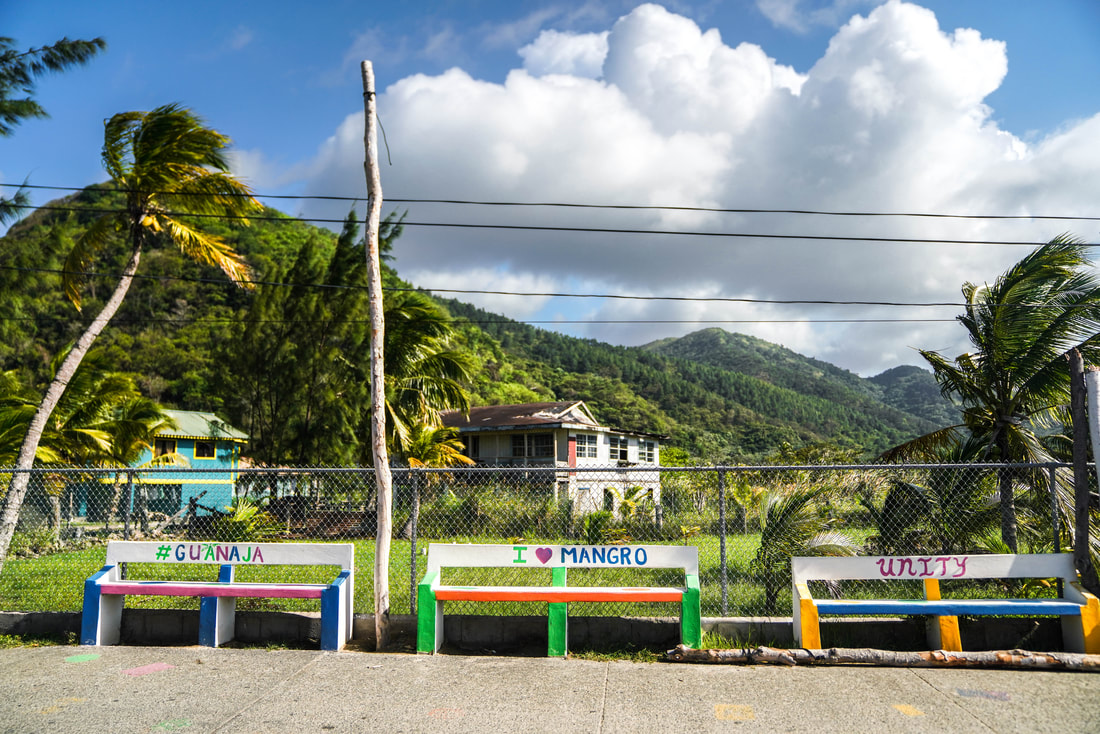 The main square i n the hear t of Mangrove Bight, Guanaja. Photo by Knox Kronenberg.
On the boat, we exchanged pleasantries; hypothesising the week ahead. Steve sat at the stern of the rocking boat, gazing familiarly across the grumpy waves as grey skies crept over our heads and Guanaja appeared in the distance. A tall silhouette, almost volcanic, drew us and the stormy weather in.

Warm smiles and excited laughter seemingly pushed the petulant clouds back as we stepped onto the dock. Staring back at us, now illuminated by shards of golden light falling from the gaps above, the Island beckoned. The lodge, situated on the outskirts of Mangrove Bight, peaked through the high canopy of tropical flora unique to Guanaja.

Separated only by a thread of pearly sand, the dappled rainforest is heavily juxtaposed against the rich blues of the Atlantic. It is picturesque in every sense. Once in our rooms I slipped into a deep sleep, the comforting hum of the fan at the foot of my bed put my racing mind at ease. For most of the week that followed I found myself consumed by the Island’s uninhibited beauty. The warmth we as a group experienced while in Mangrove Bight will always be difficult to explain.

Led by Steve and his team of guides, the community welcomed us into their homes. The ocean, merely a reflection of the people protecting it, was unrelenting in its generosity. It gifted me countless bonefish, tarpon and, in one day, two magnificent permit. It was at the end of this day that we, as a ​group, gathered in the dining area of the lodge to learn about the Islands past.

Its story, much like my own country’s, has been westernised and white-washed. The original Paya Indian inhabitants of Guanaja, whose semi-nomadic culture we know very little about, were mostly decimated following Christopher Columbus’ landing in 1502.

By 1650 the remaining Paya villages were rounded up and one by one forcefully relocated to Rio Dulce in Guatemala. In the centuries that followed Guanaja’s ports served as important trading posts to the Spanish, Dutch and British, while buccaneering pirates scoured the surrounding waters. It was only in 1861 that the island was finally ceded back to Honduras by the British colonisers.

This tumultuous past has had a profound effect on what it means to be Honduran for many people around the Bay Islands. The clash between British and Spanish influenced culture has, to this day, divided communities around Honduras with many Bay Islander’s rejecting the predominantly Spanish-speaking Honduran mainland as their own.

The country’s history, much like South Africa’s, is not shared by all who call it home. That evening served as a sobering reminder of just how little we knew about the people and the stories around us. The paradisiacal curtains pulled back revealing more questions than answers.

My two day journey home served as time for reflection. The warm tropical breeze that had brushed my cheeks for a month
was a long shot from the cold​air-conditioned cabins I found myself bolted to.

​The bustling crowds in Frankfurt’s airport, together with the looming uncertainties in my own life, made me uncomfortable. It was clear to me that I had, once again, escaped through nature. The turquoise bays and isolated cayes that had shaped
my month had, in hindsight, shared much more in common with my own paradise back home than I could have ever imagined.

White sandy beaches and coconut trees might serve as the postcard, but the real secrets these places hold are the truths we as travellers can choose to ignore. The week on Guanaja had highlighted this obligation, to share our own stories and learn from others. The program forced me to dig a little deeper, unearthing more than what meets the eye. In this process I ​found myself searching more for the paradox, rather than the paradise
Luke Pannell, 24 years old, Johannesburg,
​South Africa. Luke is a guide for Kalahari Adventures located on the South Africa-Namibia Border where he pursues yellowfish. He also is a Fish for Change trip leader. Find him on Instagram @luke_pannell.