Tarpon and Jaguars
By Kyle Bielawski 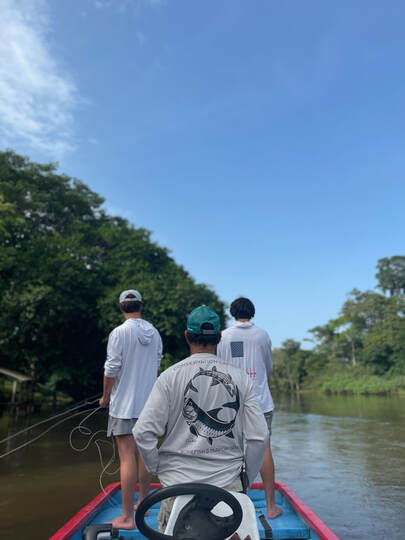 ​Throughout my first two days fishing in Costa Rica, I totaled well over 50 rainbow trout. While catching the same fish over and over again on almost every cast seems boring to some people, it never got old for me. Tom and Kevin advised us to enjoy these fish while they are here, as catching tarpon in this volume is impossible. Reality first set in when we went Machaka fishing and half of us did not catch anything. Although some of us got skunked, it was impossible not to have the time of your life.

During dinner on the first night of our stay at the Jungle Tarpon Reserve, Tom and Kevin made sure our expectations were realistic. They said that we were likely to see these magical fish, but probably wouldn’t actually catch one. This felt like getting a toothbrush while Trick-or-Treating. That feeling when you are so excited for something and then disappointment washes over you. However, I knew that I would catch one of these monsters, I just knew it.
​

​
The next morning I found myself sitting on the boat with a glass of local coffee, in complete shock. At first, I thought I was still dreaming and that there weren't actually dozens of tarpon rolling right in front of me, but I was wide awake. Napo, one of the local guides, steers us right into the middle of the action and Tom hands me a rod. Without any hesitation I attempt to do a double haul and somehow get the fly out about 40 feet. After stripping in line for about five seconds, I feel the power of the prehistoric fish that Kevin and Tom love so much. Simultaneously, the line gets stripped out of my hand so fast that it sears the skin on my hands and fingers, leaving me with a burn that lasted for weeks. The adrenaline coursing through my body outweighed the pain on my burn and I started my battle with the fish. There truly is no other feeling like what I felt. The amount of excitement in the air during the fight was incredible. I was able to time my bows with the tarpons jumps due to Tom’s help and eventually land the fish after about 3 minutes. After I had landed the fish it ended up breaking off before I could get in the water with it, but I was more than grateful for what I just experienced. My entire body was shaking as I was congratulated by my friends. 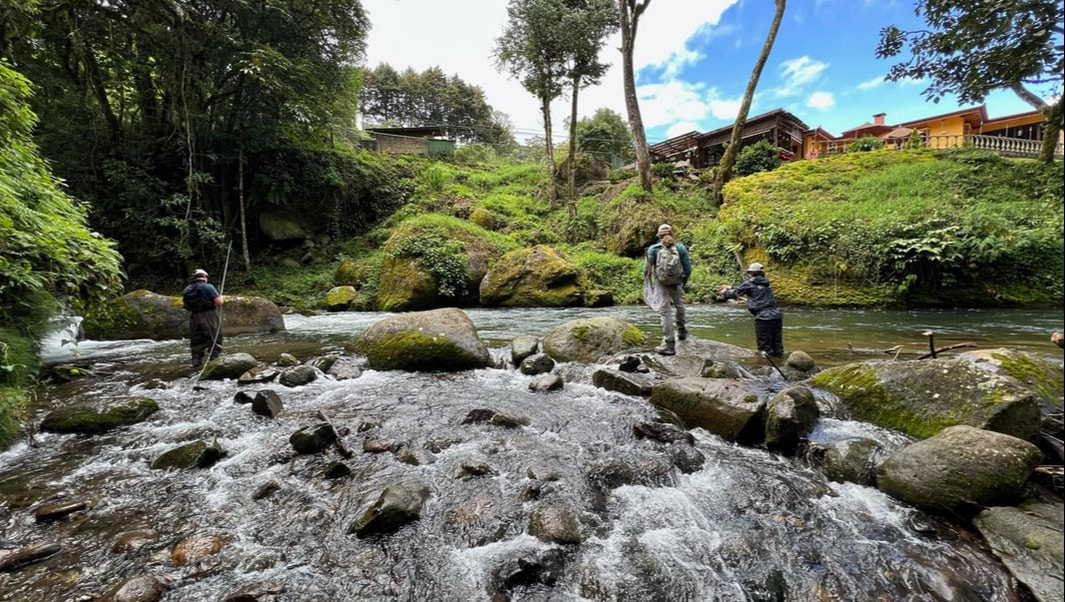 After my catch, we fished that lagoon for about 45 more minutes before leaving. Napo said he knew of another good spot up river where he thinks we would have success. As we sat and waited to get to the new spot, I talked to Tom about his study of jaguars. While Tom is an avid fisherman, he also deeply enjoys studying the jaguars of the Jungle Tarpon Reserve. He said that in his 8+ years of studying these evasive cats, he had only seen one in person. Tom even pointed out where he saw the jaguar, it was a low tree overhanging the water. He said that these animals are like ghosts, as people who give their whole lives to jaguars often never even see them in person. The events that occurred next seem fake, however they are not.
Right after we turn the corner, we see a massive animal in the middle of the river, swimming across. Our hearts sank well below the surface of the water, and we slowly started muttering “No, no, it can’t be”. We were so mesmerized and still it seemed like we just looked into Medusa’s eyes. I could not believe what I was seeing, a full grown female jaguar, swimming across a river right in front of me, in the middle of a jungle in Costa Rica. As the beast got out of the water and trotted into the jungle, we saw its unmistakable pattern crystal clearly. The silence was broken by our screams of excitement and awe of what we just witnessed. I turned over to Tom and gave him a big high five and hug, and we celebrated once again. Seeing what we saw was a miracle alone, but the timing of it was almost too good to be true.
​
This was easily the highlight of my trip. Not many people get to say they have caught a tarpon, let alone seen a jaguar within hours of landing one. Whether having these experiences back to back is luck or not, I am eternally grateful for what happened in Costa Rica. I expected all of my favorite memories from the trip to be from fishing, and while some of them were, it was the people and the spontaneous events that made my trip so memorable.
Kyle Bielawski, 17 years old,  San Francisco Bay Area.
Kyle has always loved fishing, hiking, and the outdoors as well as football and baseball. He went to Costa Rica in July 2022 and had not only the best fishing of my life, but one of the most memorable experiences of my life so far.