​
In Pursuit of Permit
By Stevie Kim-Rubell
Left : Guide Kendell - voted best smile on guide staff. Right: Behind the scenes moment of student rigging up and helping out their peers before a day on the water. Photos: Knox Kronenberg.
I caught my first permit on fly four years ago in 2017. My dad, who in retrospect was a little insane, had booked us a fishing trip to the Mexican Yucatan. I was only eleven. As per usual, I was the only girl at the lodge and also the only kid. On the first day of the trip, I caught more bonefish than I can possibly remember. And then, on the morning of the second day, on maybe my second or third shot of the day, the lead permit in a school of five ate my fly.

I was ecstatic. The whole thing happened perfectly. My dad got everything on video and the whole fight was seamless. I brought it in 13 minutes and screamed when the guide grabbed the fish's tail. I was smiling ear to ear, but it wasn't until years later that I realized what beginners' luck I had. The joy I felt that day was a result of good fishing and good luck, but it wouldn't be until years later that I would know the feeling of accomplishment by overcoming the true challenge with these fish.

I then spent years pursuing my second permit. I spent hours on the water staring at glare and waiting for fish to show up. Even when I was fishing for tarpon or bonefish, I always had it in the back of my mind that a permit could show up. I wanted to be ready. I yelled at the ocean, and the fish, and the clouds. It was all-consuming. I had nightmares about permit. And I was determined to do whatever it took to catch another.

Everyone who knows me knows that I'm extremely competitive. If not with others, then with myself. The idea that a permit is something an angler could pursue for a lifetime without catching one captivated me. I love a challenge, but more than someone else challenging me, I love to challenge myself.

In general, fly fishing sounds insane. Throwing feathers and foam at fish and expecting to catch them or even feed them sounds absurd to say out loud. Then, when you try to explain permit fishing, there's the added element of being able to do everything right and still get a rejection. More than anything, it was something that I needed to prove to myself.
​ 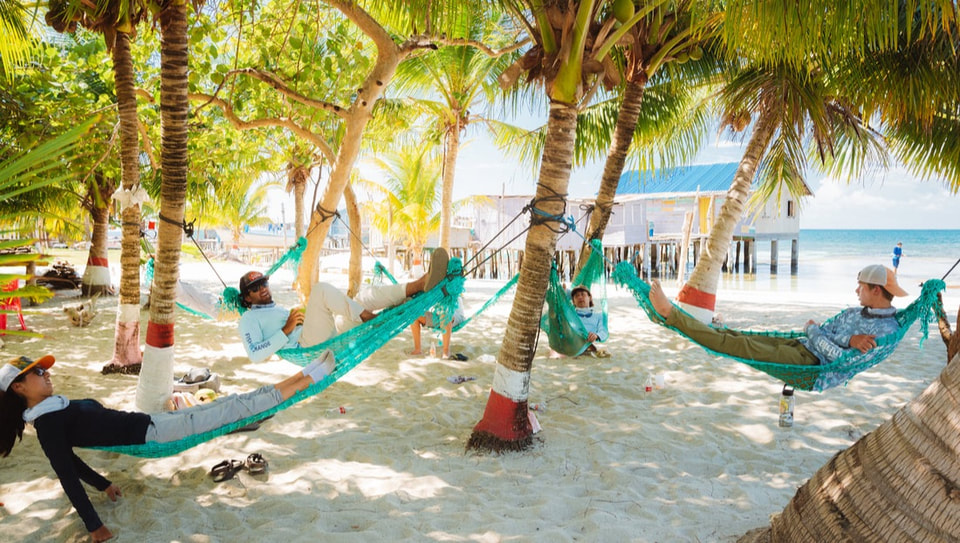 Right : Hanging out in Mangrove Bight.
​
Photos: Knox Kronenberg.
My whole fishing career, I've had imposter syndrome. I've always fished with my dad, and I've always had guides tie my leaders and choose flies and whatnot. So, in the back of my mind, since I was eleven, I've always thought "Did I really do something special to catch that permit, or would anyone have been able to do standing on the bow of that boat?".

​This summer, going to Guanaja, I had my mind set on permit number two.

I told everyone on the boat ride over to Guanaja from Roatan that I was sure that I would catch a permit. After all, I knew I had the most experience of anyone on the trip, and I was the only person who had already caught a permit before. Since my last permit, four years ago, I had improved so much as an angler, so I thought, if I can fool one permit, I can certainly fool another.
While the rest of the group seemed to be having the most amazing fishing, I struggled. I journaled each night about feeling disappointed and inadequate. I even shed a few tears. I hated how hard this was for me. I can admit that I've always been a lucky angler. I frequently find myself in the right place at the right time. That, combined with the fact that the mechanics of fishing feel second nature to me, made me believe that it was a given that I would catch another permit. ​
​Right: Stevie holding up her prized permit with guide, Kendell. Left: A stroll down Main Street Mangrove Bight.
​Photos: Knox Kronenberg.
"The next memory I have is  Kendell grabbing the fish and my  hands shaking so badly I could
barely hold the road. Everyone on  the boat was smiling ear to ear."
Then, during my second week in Guanaja, my mindset started to change. I imagined myself on the plane ride home. In the first scenario, I had caught my permit, and I was smiling because I was proud. In the second, I hadn't caught my permit, but I was smiling because I had just spent a week on a beautiful island with amazing people and made some memories that I know will last a lifetime.

But still, on the second to last night of the trip, I stayed up till 1 a.m. talking with Heather about how frustrated I was. I cried as I told her how defeated I felt. And right before we both fell asleep, she said "Wouldn'tit be funny if tomorrow morning you caught your first permit?" and we both laughed at the crazy thought.

It was the first day of the entire trip that I answered that way, letting go of what I thought permit owed me and focusing on what I had gained from them.

I let Quinn take the first shot of the day. We were in a beautiful flat with mountains in the background, and as he cast, I was thinking about how lucky I felt to be in a special place. I wasn't focused on the fish. I was focused on the experience. I got up on the bow a few minutes later. I'm told I made a great cast at school of around eight permit. As Knox and Quinn have told me, I made a cast to the front of the school and two fish came after my fly. I hooked one a few strips in, but truthfully, I blacked out on the whole experience.

All I remember was screaming when I hooked the fish.

The next memory I have is of Kendell grabbing the fish's tail and my hands shaking so badly I could barely hold the rod. Everyone on the boat was smiling ear-to-ear. We released the fish and then I called Heather. She'd already left the island to head to the Bahamas, and when we finally got through to her she was at the airport. I screamed on the phone with her in celebration, because this time, it wasn't luck, it was my attitude. I had spent years in my head about what catching this second permit would mean to those around me. I thought constantly about what I had to prove to myself and to those around me, and then my mindset changed and it became about the experience.

On a scavenger hunt we did around town, one of the activities was going to the bakery. The baker didn't have change for our cash, so she gave us the ginger cake for free and told us to pay her back later. I have lived all 15 years of my life in New York City. It's my favorite place on earth, but it can also feel incredibly cold and isolated. No bakery in New York would ever tell you to pay them back later. It was shocking for me to experience such generosity everywhere I went on the island.

​My two weeks in Guanaja ended up being much more about forming life-long friendships and learning about the history of this beautiful island than fly fishing for permit. What I'm looking forward to going back, isn't permit. It's the guides and their kids that feel like family to me, and it's the friends I met that I can't wait to be with again. So, if I could say it all in one sentence: come for the fish, and stay for the people.

​Stevie Kim-Rubel/, 16, NYC.
Stevie started fly fishing at age 6 and hasn't stopped since. Her obsession for saltwater fly fishing took her to Guanaja this summer in pursuit of her second permit. Though focused on the fish, Stevie was always down for an impromptu dance party, or early morning yoga.