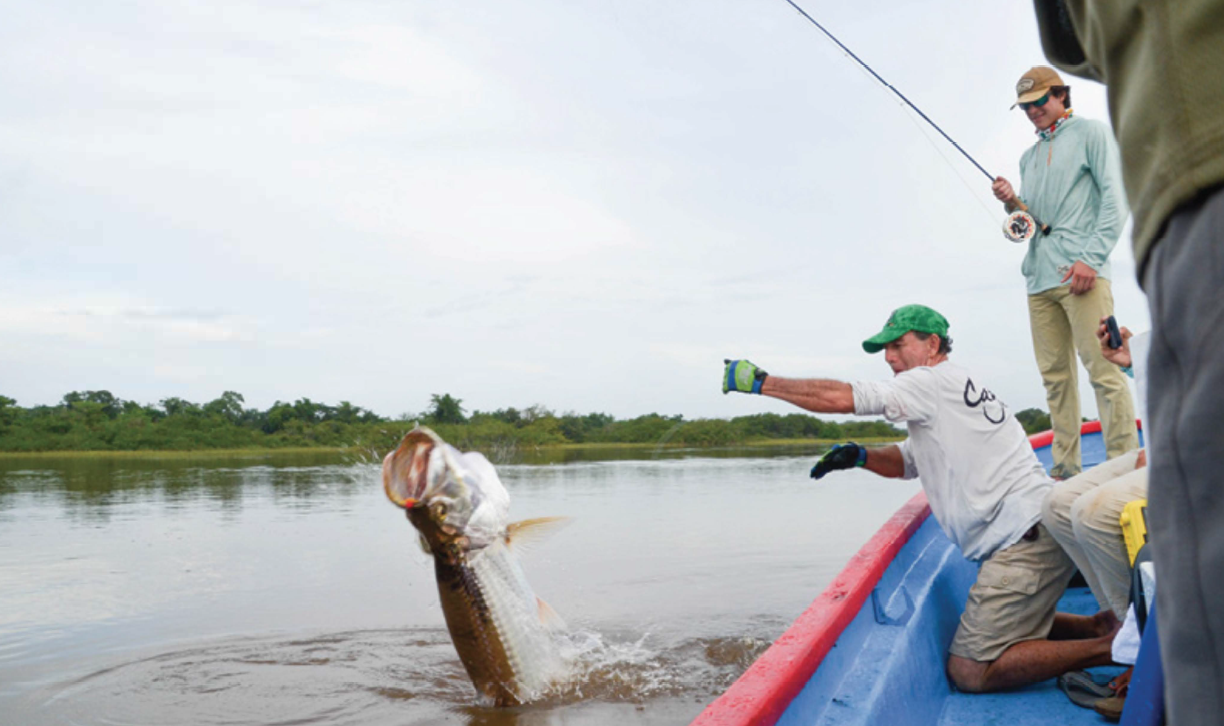 Photo: Hank Smith.
Hank Smith
After a long 6 hour drive through the Costa Rican jun­gle, we finally got on the water and psych levels were high. As soon as we drove into the lagoon, we saw tarpon rolling everywhere. I was nervous because I had never dealt with fish of this size before.

After messing up my first shot due to nerves, I was able to calm down and make a good cast at a rolling tarpon. I had no clue what was about to happen, and before I knew it the tarpon swung and missed at my fly, and as I kept stripping, it came back and absolutely destroyed it. The fish launched into the air and the line flew everywhere. I stuck him again with a couple strip sets and I knew he was pinned.

Line wrapped around my toes as I struggled to bow to his jumps. The whole boat was pumped as we watched this mag­nificent fish go airborne and explosively head shake. Finally, when we got him out in open water we were able to com­pletely land him and grab a pie.
​
We let him go and I gave our guide, Napo, a fist bump and was finally able to soak in how awesome of an experience I just had. I had just landed a fish of a lifetime-and that was

​Hank Smith, 17, Texas.
Hank is an avid hunter and angler from Austin, Texas chasing freshwater and saltwater species in his home state and beyond. 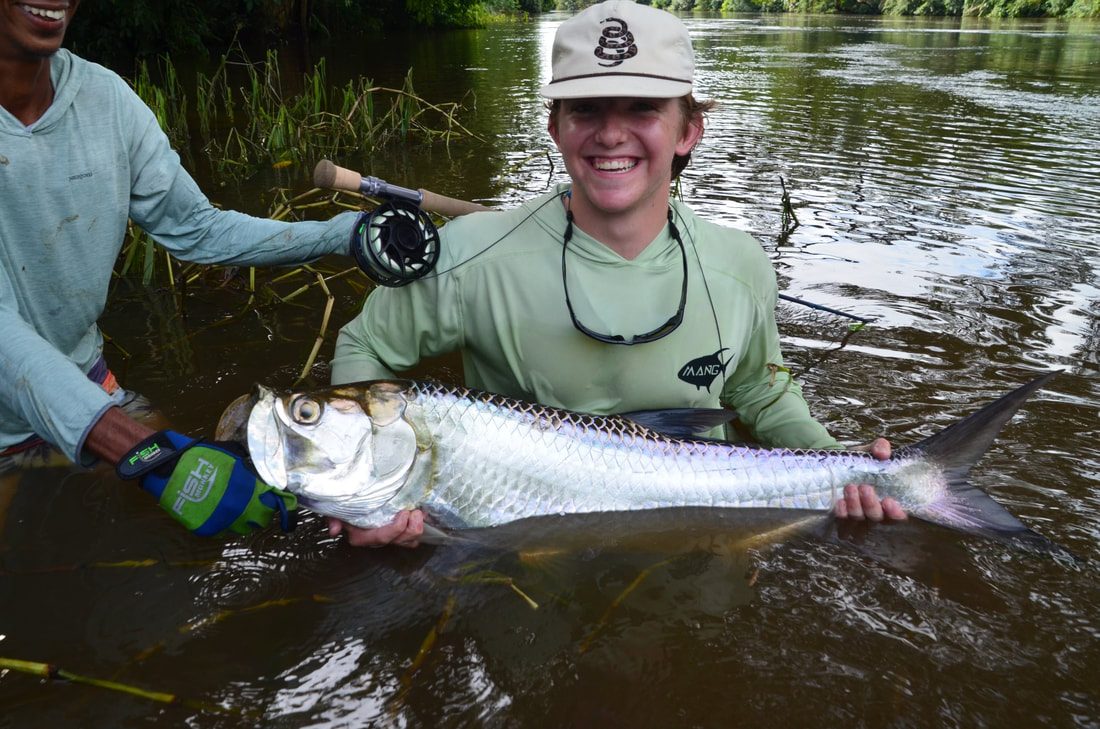 Photo: Beck Wiltshire. ​
Beck Wiltshire
As we came up on our fourth day of fishing, I was treading water in my own head, nervous. I was scared and anxious about the fact that I was gonna get skunked in one of the coolest places in the world to fly fish. I had some pretty amazing encounters with these jungle fish up until this point, including jumping a 60 pounder my first morning that made eye contact with me while coming up from the depths, absolutely inhal­ing my red-headed, white-tailed tarpon toad. I broke that fish off shortly after he ate due to my inexperience with these beasts, but I couldn't get the moment out of my head. If only I had let off the tension on the rod and eliminated my last hook set.

After a long first half of the day setting camera traps in the jungle for jaguars and contemplating my life deci­sions after my missed fish the previous day, I was look­ing forward to a chance at redemption in the afternoon.
We suited up and headed out with our guides, mine being Rasta, along with Hank and Heather joining alongside me. We ran down river and settled at a place where Nathaniel had caught a fish earlier in the week.
I grabbed the sinking tip rod and began to cast. As we laughed and had many games of "would you rather," we grinded out tons of casts. Eventually, I got lucky. I felt the sudden dead weight hit the end of my line, the

same way it did the first day at the colosseum when I jumped my first fish. I set the hook as hard as I could, and as many times as I could. I felt the adrenaline rush and heard Heather and Hank cheering me on.

I bowed to this small yet powerful fish as he jumped, and to lighten the mood, Heather started playing "Long Distance" by Sam Gellaitry, a song every fly fisherman knows. It was the hype song that we agreed to play if we hooked up with a tarpon.
I couldn't help but die laughing while trying to keep pressure on this fish, but after 10 minutes of fighting, we got him to a shallow, grassy area where we could pose for pictures in the water.

I couldn't contain my smile. No faking it at all. Didn't even have to try. I was truly psyching out of my mind. We got some sweet pictures and let the fish go. I gave Rasta a big fist bump and several more to Heather and Hank as I climbed back in the boat.

Greatest. Day. Ever.
Beck Wilshire, 17, Texas.
Introduced to both fly fishing and Fish for Change by his older brother and Trip Leader, Bo, Beck has come to love fly fishing, especially for Redfish on the Texas Coast.